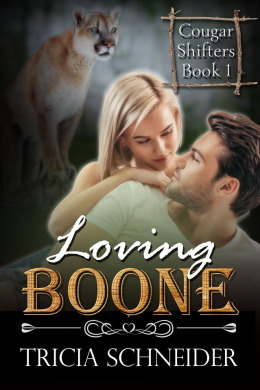 Fighting for their lives... and love...

Beth-Ann Miller returns to her Tennessee mountain home to find chaos erupting between her survivalist family and their shape-shifting neighbors. Her father is convinced the were-cougar clan is responsible for the murders occurring in their area and interrogates one of the shifters, Boone Evans, her childhood sweetheart. When Boone declares several members of his shifter family have gone missing including his little brother, Beth-Ann suspects someone else is behind both the murders and abductions.

Boone never expected to see Beth-Ann again. When she frees him from her father's cabin and promises to help him find his brother, Boone doesn't plan on rekindling their passionate love affair or facing the pain of past mistakes. Nor does he plan on coming face to face with the man responsible for altering his family's life forever.

With men hunting the were-cougars, can Beth-Ann and Boone risk all to have a future together? Or is loving Boone too high a price to pay?

Boone returned her stare, his green-eyed gaze boring fiercely into her heart, her father's rage reflected in his gaze. It wounded her to see him look at her with such fury.

Although they hadn't parted on the best of terms when she left for college, she had done nothing to hurt his people. And she didn't believe her father would either.

But Boone stared at her with such accusation, he didn't need to verbalize his thoughts.

She was one of them.

Beth-Ann parted her lips, trying to think of something appropriate to say. Nothing seemed right. What words could she say to fix this? To fix what happened between them.

So, she closed her eyes, took a deep breath and straighted her shoulders.

When she opened her eyes, he remained straining against his bonds and staring as if he wanted to cut her apart.

But this was Boone.

She stepped forward. From the corner of her eye, she caught sight of her Uncle Travis about to protest, but she raised her hand to silence him. She stopped when she was an arm's length away from Boone.

He kept his gaze fastened with hers, not even blinking as she approached.

Beth-Ann gently pushed a few sweat-soaked strands of hair out of his face so she could view his injuries better.

She gasped at the blood seeping from several cuts on his cheeks and around his eyes. Redness discolored his cheekbones from the impact of her father's fists and swelling was not far behind.

His face was going to be one big bruise.

Even as she stared, the flesh around his left eye was growing puffy.

"You're going to need ice," she muttered, more to herself than to him.

"I'm going to need that knife," he answered, nodding to the dagger still sunk into the floorboards.

"Not here," she said with a shake of her head. Her father wouldn't kill him. It wasn't in his nature. "No one will hurt you here."

This wasn't the Boone she left behind. It was as if she gazed into a stranger's face expecting to see the boy she remembered. He might look the same, but his eyes had changed. His soul had changed. He'd been wounded in ways she couldn't comprehend.

And, he had it right. Despite her beliefs, he'd been hurt by her father's hand. Geoffrey already inflicted injuries on him that might have killed a normal human.

But Boone wasn't human, was he?

"The cover is absolutely sexy and eye catching. The author has a great writing style that kept me reading. The characters are wonderful and sexy with chemistry between them that had it hot in my room. lol I'm a huge shifter romance fan and I absolutely loved this story."

"I couldn't put this book down! Right from the beginning I was hooked, the suspense, the action, the romance, this book had it all. Highly recommended."

"Looking for a great paranormal romance with cougar shifters? Look no further! You have a rural mountain setting. A clan of survivalist humans (including Beth Anne's family) who have moved out to the middle of nowhere because they don't trust life in the cities. A clan of shapeshifters who have been persecuted and hunted (Boone's family). People start getting killed. Shapeshifters start disappearing. Both sides blame the other and pretty soon, all out war erupts. But Boone and Beth Anne, who were high school sweethearts, band together to try to figure out who's really behind the abductions to save both their families. This had a little of everything-supsense, family drama, romance, twists and turns. A great start to a series!"

"This book has elements of romance, suspense and paranormal, and there are enough twists and turns to keep your attention. Definitely a HEA ending."

"This book pulled me in and kept me entraced till the end. The feelings of love, hate, and pain coming out in waves making you want to cry while you read. This was such a beautiful book! I loved the characters wholesomeness!"

"This is a great shifter story. Imagine being the daughter of a survivalist and being in love with a shapeshifter. People are killed. Shapeshifters are disappearing. There is a mystery to be solved. The characters are great and the story is good. I enjoyed this book very much and would highly recommend it."

"I totally loved this book, Loving Boone the 1st in the Cougar Shifter Series. I have bought this book to read again. Action from beginning to end. I love the shifters, and there are mysteries to be solved. If you love shifter series with stand alone books you will love these. HEA with a continuing story. Could not put down once started.

"This is a really entertaining shifter romance. The story is engrossing and has a fantastic storyline. This is a beautiful story in regards of Beth-Ann and Boone's romance and is exciting in regards of the mystery, suspense, and action. This captured my attention from the very beginning.