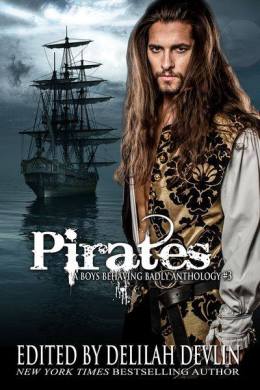 Sail on the high seas or into uncharted galaxies!

When it comes to love...pirates risk all!

Delilah's next delectable anthology is filled with roguish pirates! Readers who crave adventures set on the high seas - or in deep space - will find plenty of sexy bad boys, naughty alpha males unafraid to risk life and limb for treasure - or a lucky lover's heart!

Just a few of the titillating stories inside...

In "Treasure of Devil's Crag" by Lisa Fox, two rival pirate captains seeking the same treasure, discover the competition isn't the only thing that heats up between them. A modern-day pirate boards a yacht seeking revenge and captures a runaway bride who tempts him in ways he's never experienced in January George's "Captive Desire." In T.D. Rudolph's "Lust in Space," a space criminal teams up with a fearless vampt to steal a cache of titanium - from the dark side of the moon. In "Full Fathom Five" by Rhidian Brenig Jones, a pirate captain, forced to give a disgraced young surgeon a berth, discovers a rich treasure in the other man's arms. And this is just a hint at the sexy stories inside this satisfying volume.

These pirates will pillage and plunder their way into your hearts!

The Treasure of Devil's Crag by Lisa Fox

A Lady's Bargain by Alyssa Drake

My Pirate Love by Joyce Palmer

An Adventure for Burgess by Lizzie Ashworth

Lust in Space by T.D. Rudolph

To Kiss a Pirate by Tricia Schneider