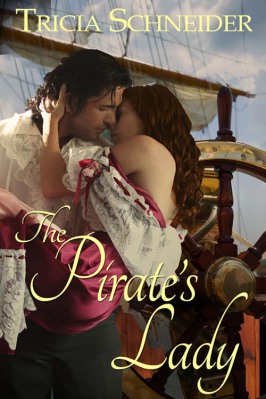 Captain Marco Dante was captured and sentenced to hang two years ago, but he escaped before his sentence was carried out. Now he's come back to the woman who's memory kept him alive those long months in prison. Arianne had been his grand passion, but he failed to see how much she meant to him until it was too late. Can he recapture her heart? Or has he lost her forever?

Arianne never imagined she'd see her notorious pirate lover again. Though her heart sings with joy at his return, she knows he hasn't come back for her but for the treasure he left behind. She agrees to help him find it, but can her heart withstand one more adventure with him?

"There's nothing for you here. Your place is by my side. In your heart, you 'tis true."

She looked away, turning her gaze to the ocean’s waves pounding the beach with hypnotic rhythm. A few moments ago, she sat here, mulling over her life’s misfortunes and attempting to reach a decision about her future.

Arianne shook her head. “I no longer travel your path. You sail without me, my friend.”

She pushed her bare toes into the grainy sand and stood, brushing the remaining sand that clung to her petticoats. In the silence of the crashing waves, she turned and walked away.

Inside, her heart bled. Yet, she deserved no better. Her life led to this heartache. That she walked away from this man now, after all this time only confirmed it.

“Arianne, you’re coming with me.”

His serious tone warned her of his intentions. She spun to face him, unsheathing her sword in time to block his attack. The sound of metal striking metal pierced the moonlit darkness. Her ears rang with the sound.

They stood, neither moving. She stared into his eyes. “You would take me by force?”

“Never by force,” his voice lowered to a growl. “You will come willingly.” And he

smiled, that knowing one she hated.

She let out a howl of outrage and swung her sword. He easily blocked. They stepped

a deadly dance of striking blades, until again they were trapped by heated gazes.

Her breathing was heavy, labored, filled with excitement. She looked at his lips, wanting to taste them but knowing she dared not. Her will was never strong around him. With one touch she might lose herself and want him again for forever. But that dream would never be achievable with Marco.

With him, she’d always be alone.

“Come with me, Arianne.”

She pushed away and again they danced. Her feet moved lightly as she sprang, her petticoats swirling with each movement though she hoped they would not entangle her legs. Her arm swung with lithe movements as she fought. She equaled him with skill and grace. Each time their swords clashed, the noise pierced her soul. That she fought him was a testament to her determination to escape his tyranny over her heart. She could not succumb to him again.

As they battled, a sheen of sweat appeared upon his brow. The exposed skin of his chest glistened in the moonlight. His arms flexed as he swung his sword. His grace, his power, his energy seduced her.

Her heart pounded. Her skin ached to touch his. The heat in her lower regions grew to a fiery inferno. She trembled.

They stood a moment, staring. His gaze burned into her soul. She licked the salty sweat from her upper lip, and his eyes followed the movement with utter fascination.

He pushed their swords away. With his free hand, he grabbed her shoulder, pulling her tight against his chest. Arianne tilted her head to look into his eyes. The blue depths called to her, like the ocean’s waves licking at her feet. The yearning to go to him was too great. She hadn’t the will to fight.

This was such a good novelette! Arianne was a strong-willed woman with a soft spot for the rugged pirate captain. Marco was an alpha male, used to being in charge, but unable to ignore the way Arianne's presence affects him. His jealousy when he assumed Arianne had found another man was simply adorable. I was pleasantly surprised by how well these characters were brought to life in such a short span of time and pages.

The plot is steady but not very complex. There are hints and tidbits of the history of the characters and their past romance. The ending did surprise me a little bit. I was paying attention to all of the clues but didn't guess the mystery of why Arianne wanted so badly to return home. And the reunion of Marco and his nemesis was a twist I hadn't seen coming, either.

In closing...
A nice and quick read with pirates, adventure, secrets, and danger! Five suns!

Dawn West, Up 'Til Dawn Book Blog, about The Pirate's Lady

I totally enjoyed this story it had everything I could possibly want, it was intriguing and full of mystery. The author did a phenomenal job in the descriptiveness of the feelings of the characters  and surroundings were well written. Although short it delivered! The Pirates Lady by Tricia Schneider is one fast paced sexy read! Will be looking this author up!

I loved this story. The book got better and better with each page as you find out why Arianne was hiding on the island, why Marco was arrested, the secret she kept. I highly recommend this adventurous romance book.

Amazon Reviewer, about The Pirate's Lady